Here we explain everything you need to know about Japanese saws and what ones to buy. From the different types to what sets them apart from western saws.

The most distinct feature of a Japanese saw is that the teeth point towards the handle. When in use, the cutting action is on the draw-stroke. The saw cuts as the user pulls, totally opposite to a traditional western saw. It is doubtful there was ever a decision made as to which way the saw should work. It may well be that it evolved naturally through the working practices of the Japanese carpenter.

A favourite theory is that many were journeyman carpenters, needing to travel as lightly as possible. As a bench would be too heavy to carry, working on the floor became the norm. In this position, it is impossible to put any force into sawing on the push stroke. Pulling however is entirely the opposite and tremendously efficient. After years of evolution, we can see the fruits of this working practice. This is only one theory however, there are many more.

When a Japanese Saw is Working

When a Japanese saw is working, the blade is in tension rather than compression as is the case with a Western saw. In consequence, the blade of a Japanese saw can be far thinner and be of much harder steel. A Western saw is after all a compromise; it needs to be thicker and tempered in order to resist the pushing force when cutting. This makes it heavier and it will require much more frequent sharpening because the steel is softer. The Japanese saw is therefore naturally a great deal lighter in weight and will stay sharp much longer.

The harder steel allowed the geometry of the saw teeth to evolve differently. This is most noticeable on the crosscut saws where the teeth are long and fine. Closer inspection reveals not one but up to three cutting edges on each tooth. The teeth literally slice through the wood like a series of super sharp knives leaving the smoothest of cut surfaces, almost planed, rather than sawn.

Rip cutting teeth look very similar to Western teeth, the triangular chisel type. Even so, on the better quality Japanese saws the teeth are smaller nearer the handle allowing for a series of short strokes to start the cut, before bringing the full length of the saw to bear on the workpiece. Being so thin, means removing far less material from the actual cut, on average the kerf is at most only a third of a similar Western saw. This means, the worker only expends a third of the energy to achieve the same result and will finish the job much quicker.

Japanese saws or Nokogiri fall into three basic styles. The single edged backless saws referred to as a Kataba, the double-edged or Ryoba and the single edged with a stiffening back or spine known as a Dozuki. There are slight variations within each category for more specialist functions.

The Kataba saws, having no backs are ideal for deeper cuts. These are the equivalents of western rip and panel saws. Examples in the Axminster catalogue are the Hassunme rip and crosscut saws, both of which feature replaceable blades. They remain sharp for a considerable amount of time, but once dull it is simplicity itself to change the blade.

The handles of both saws have identical fittings so it is possible to purchase one saw and a replacement blade of the other type, just change from one to the other as and when required. A further benefit; removing the handle means the saw will fit neatly into a toolbox.
View the Kataba saw here

The Kugihiki or flush cutting saw has an exceptionally thin and flexible blade. The teeth have no set; it is perfect for cutting the protruding ends of through tenons or dowels without damage to the surrounding area. When using this saw, it helps if you gently rest the fingers of your free hand on the back of the blade just behind the cut. This gives much greater control. View the  Flushcut saw here

The most visually striking of all Japanese saws is the double-edged Ryoba style. Surprisingly, it is a recent addition to the Japanese woodworker’s toolbox, originating just over 100 years ago or so. In reality, it is a crosscut and a rip cut Kataba back to back on a single handle. Instead of carrying two saws the woodworker only requires one dual purpose saw, a little less weight to carry around and a good deal lighter on the pocket.

The Ryoba must be the ultimate tenon saw, one edge for ripping down the cheeks and the other to cleanly crosscut the shoulders. The Ryoba saw from Axminster features a replaceable blade. These saws are for the professional woodworker and are not to be confused with cheaper alternatives. The maker scrapes the blades so they are thinner in the centre in order to prevent them binding in a deep cut. Careful checks on each blade ensure its flatness before it leaves his factory. The quality is comparable with the best Western saws.

Within the Dozuki saws is the Dozuki-Me. This has a blade thickness of a mere 0.3mm. Such a thin blade needs a steel spine to give it rigidity. In a similar way to a western tenon saw, the weight of the back provides the necessary downward pressure to ensure a smooth cutting action. This saw also features a replaceable blade (because at 25 tpi it is not an economical proposition to sharpen even if a file were obtainable). For deeper cuts, a wider blade is available.

Also in this group is what has proved to be a hugely popular saw, the Ikedame. Its name refers not so much to the saw but rather to the particular pattern of the teeth. Specifically designed for cutting small intricate joints down the grain, the dovetail comes immediately to mind. This is where the Ikedame has found endless friends. Another Dozuki is the Ice Bear brand Kumagoro saw, with very fine teeth at 25 tpi. With a 190mm long blade, it falls between the two previous saws and will prove a useful tool for cutting all manner of fine joints.

To get the most from a Japanese saw the main thing, is to relax and let the saw do all the work. The only thing for the woodworker to do is to provide the backward and forwards motion. Either pushing or trying to force the saw to cut can result in one of two things, the blade will buckle or a tooth may snap off. Don’t worry if the odd tooth gets broken, which can happen in very hard woods, this will not affect the saw’s performance. It matters not whether you hold the handle near the blade or at the far end, whichever feels most comfortable is correct, a good quality Japanese saw will stay on line. View the Dozuki-Me Tenon saw here

To sum up, compared to its Western counterpart the Japanese saw is lighter in weight and thinner, therefore, requiring far less effort on the user’s part. The unique tooth form results in much faster cutting. It is harder so stays sharp for a very long time and being so sharp results in cleaner, more accurate cuts. 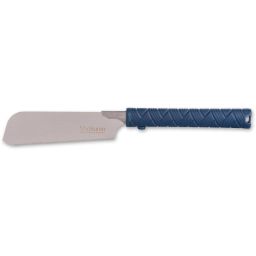 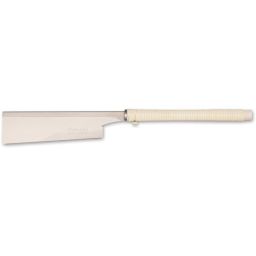 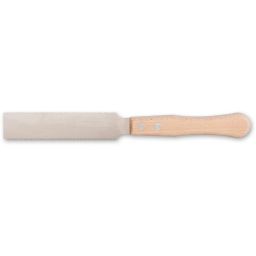 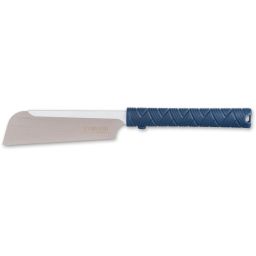 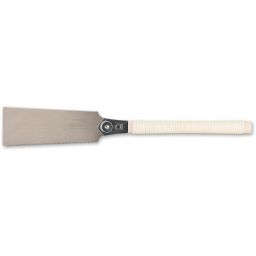 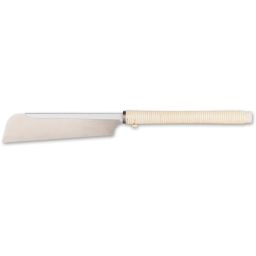