Terrific. You’ve just bought a new Rider bench plane, or even better, several of them, but now, having used them for a while, the blades are going to need some TLC to get them back to that ‘hair shaving’ degree of sharpness which most woodworkers crave.

Any discussion on sharpening and honing is bound to be fraught with all sorts of difficulties as everyone has their own pet way of achieving the ultimate edge. No one way is any better or worse than the next, they’re just different, using different methods and honing media.

Along with the new Rider Bench Plane range, we’ve also recommended our own honing guide based very closely on the original Eclipse No.36 model as well as a diamond bench stone with a very coarse 400g on one side and a finer 1000g on the other.

The honing guide and diamond bench stone work very well together. The coarse 400g side is useful for removing those inevitable ‘dings’ from the 30° honed edge or for re-shaping the 25° bevel if a powered grinder isn’t available. The finer 1000g side produces a good, but fairly workmanlike edge which will take shavings efficiently but which, if required, could be refined even further.

Enter the new Rider Sharpening Station, where a substantial lump of phenolic plastic has a couple of cut-outs in it, one for the diamond bench stone and the other for a top quality Connell leather strop, complete with a bar of honing compound. The phenolic board also has four non-slip feet on the underside to ensure that it won’t move on the bench during the honing process. The Rider Honing Guide is not sold as part of the kit, as many woodworkers may already own one.

Those Blog readers with keen eyesight will notice that there’s a strange ‘step like’ area at each end that’s been machined out of the phenolic surface. Each step has been engraved 25°, 30° and 45°. They’re intended to be used with the Rider Honing Guide to ensure that the correct, repeatable honing or grinding angle is achieved every time the blade is sharpened.

It’s important to note that these projections (the 45° setting is for the scraper plane blade) will only work with the Rider Honing Guide. Using an alternative guide with a different sized wheel will obviously provide the same projection, but the honing and grinding angles achieved will not be 30° or 25°.

Extensive tests at Ax HQ revealed that when the 1000g edge, obtained directly from the diamond stone, was treated further on the charged leather strop, the improvement was quite dramatic and after the exercise I had bald patches on my forearms! 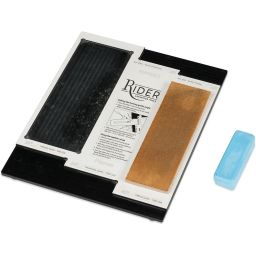