Having worked continuously since 1967, a few years ago I had a very attractive inducement to take early retirement, which I subsequently did in 2011 and thus armed with pocket full of cash (or at least a credit card with a decent balance), I decided to upgrade my current workshop machinery, or at least obtain a bigger bandsaw with a greater depth of cut which would be suitable for slicing veneers and other deep cutting jobs.

After much time spent in front of a computer contemplating all the options, I eventually chose a Startrite 352E model with 10” depth of cut which was subsequently delivered and installed in the workshop.

It’s been a good machine thus far but the 10” depth of cut has been a slightly limiting factor, especially when it would have been preferable to use a single wider piece of veneer rather than edge joint a couple of bits together.

A few weeks ago I was in the photographic studio at Axminster HQ, drooling over a newly delivered, superbly built and quite stunning Powermatic PM1500 bandsaw. I was also trying to visualise what sort of injuries my wife would inflict if I casually mentioned that at around £3.5K… “I wouldn’t mind having one of those.”

Being of reasonably sound mind, I sensibly decided to shelve that thought until the issue of a new Axminster Industrial Series bandsaw was ‘helpfully’ raised by Keith Thompson, the Senior Innovation & Product Manager, who asked me the other day if I’d… “seen the new one in the studio?”

It would be a gross understatement to say that I wasn’t impressed and even more impressive was that this one is within financial reach.

Apart from the 14” depth of cut, what really sold me was when I balanced a 50p piece 75mm from the rotating blade… and it stayed upright! This was a favourite trick of Rolls Royce back in the 1920s when it used to be said that a prospective customer could balance a coin next to the Spirit of Ecstasy and start up the engine.

It also appears to have a smaller ‘footprint’ than the Startrite and is fitted with twin 100mm dust ports. Having just completed an extensive four part series on the perils of workshop waste and dust, good extraction on any machine has to be a key consideration before purchase.

After consultations with my wife, the financial wheels were put in motion to allow me to buy the new bandsaw and, to crown a very successful day, I sold the Startrite the same evening to a very old pal who lives just the other side of town.

There’ll be a full review of the new bandsaw later, once it’s installed and I’ve had a chance to test it thoroughly, but in the meantime I’m going to have to twiddle my thumbs for a while… 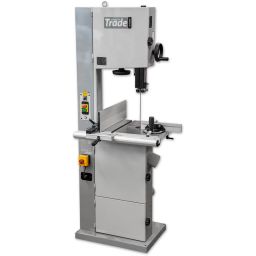